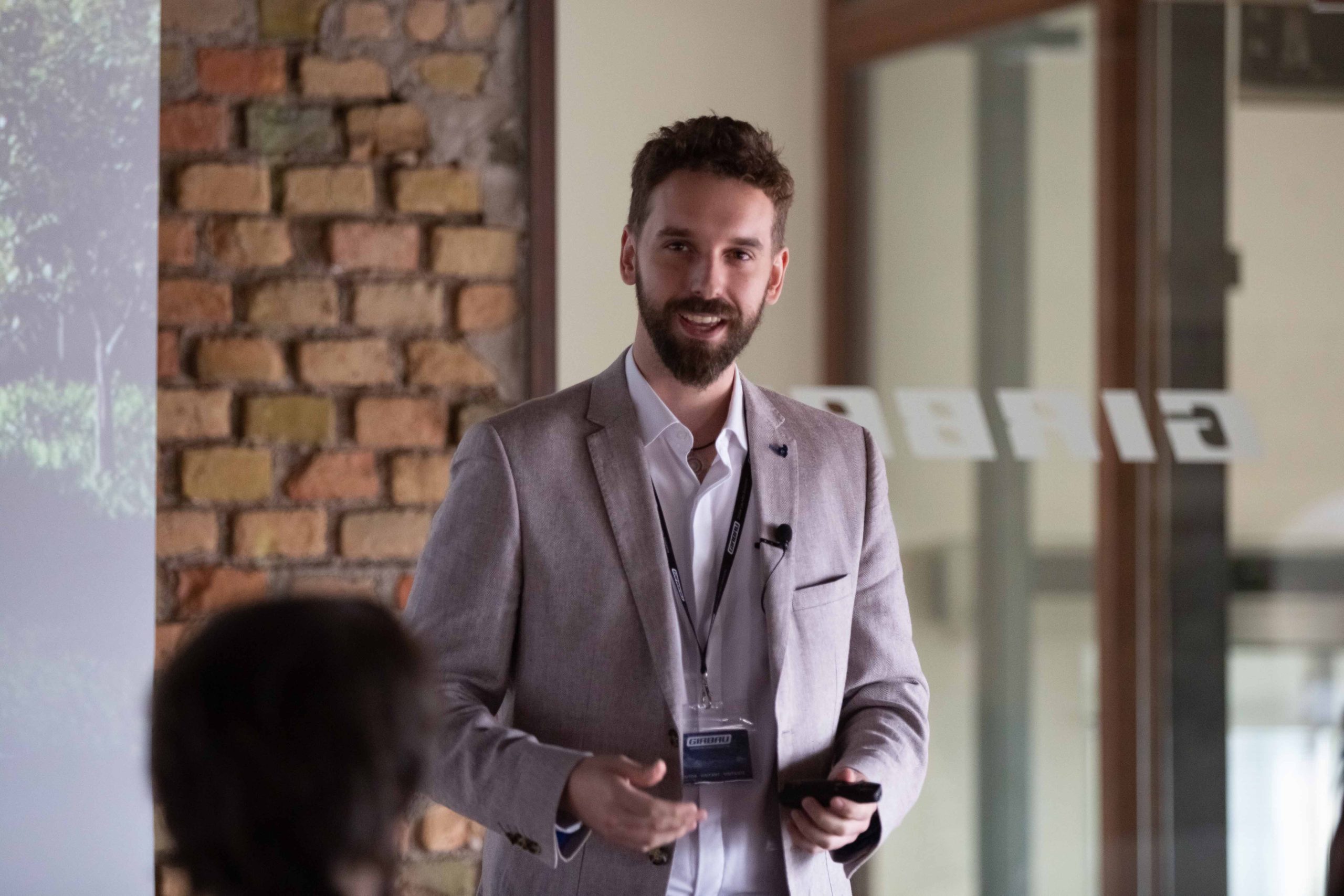 The third session of the new season of the Innovators Club took place on September 29th, with Pablo Vidarte, founder of Bioo, as guest speaker.

Pablo Vidarte’s interest in science and technology has transcended the theoretical to become facts that bring the possibility of transforming the future. Among his creations are: biological batteries that “plug” into the soil to generate electricity naturally through natural microorganisms in the subsoil; and biological switches that are activated through interaction with plants.

Vidarte explained how Bioo was born: “It was during a dream. It was a very lucid dream, in which I could even touch things and see them with even greater definition than in real life. Then I realized that underneath the crops there were wires, and that they were producing energy from nature. After all, plants do create energy, so why don’t we harvest energy from the plants themselves?”

From there, Pablo set up a prototype with the support of a group of volunteers made up of engineers and university professors. 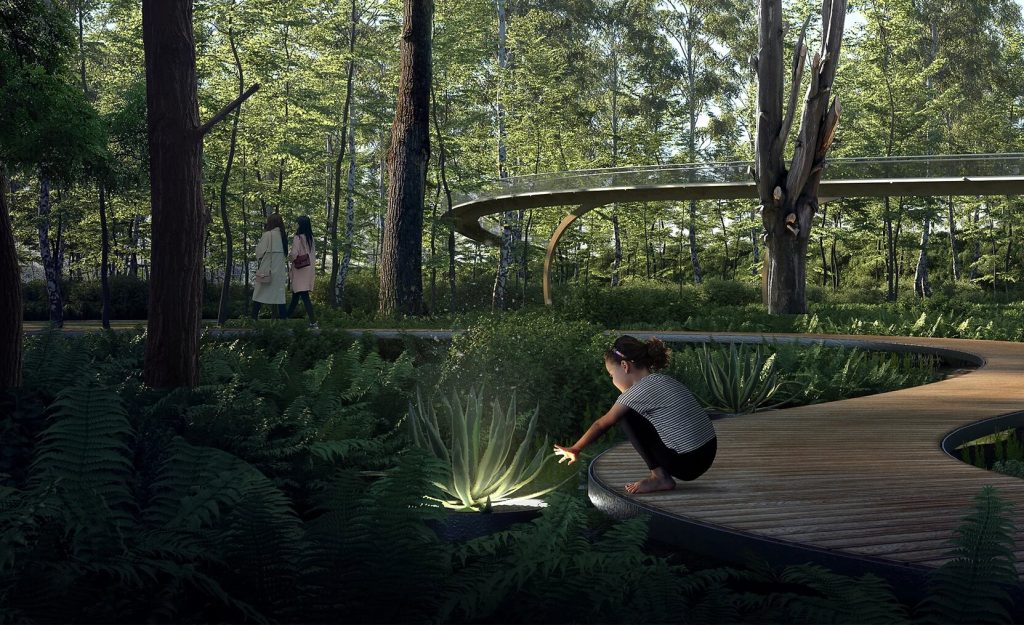 Pablo Vidarte also shared his vision for creating the world’s first biotech buildings and cities with nature-powered technologies. His mission is to create a biotechnological transformation, bringing together nature and technology through innovative solutions that improve the quality of life.

A fascinating session that we share below in an interview format.

What are Bioo’s origins and what are its plans for the future?

Bioo was born from a dream I had, in which electricity was generated from nature. Biological batteries in controlled environments have existed since the 1970s, but they could not be applied to natural open systems because they became contaminated and, after a very short period, stopped working.

Throughout our research, at Bioo we discovered mechanisms to ensure that this did not happen. We made the first functional prototypes between 2014 and 2015. From 2015 to 2017, we made the first scalable ones in outdoor environments and in large volumes. Between 2017 and 2020, we developed Bioo Panel. Subsequently, we made the Bioo Sensor, which continues to function to date.

At Bioo we want to be part of, and, if possible, be leaders of the biotechnological revolution. That is why we have researched and worked on transformative and natural solutions. We all want a modern world fused with nature, which means not living only between concrete walls.
We want to turn cities into biotech cities, and in some areas of Spain, France, the United Kingdom or Germany, we are already doing so.

In the coming years, we want to focus on agriculture, and by 2050 our focus will be there, with the aim of reducing 1% of the forecast CO2 emissions.

What do you think has been the most important application of Bioo so far?

Bioo has developed two technologies that fuse nature and technology: biological switches (plants that act as a switch to activate light or sound), whose future lies in sustainable cities; and batteries that generate electricity through the ground and that go a long way, for example in agriculture.

We believe that both technologies have a very important impact, both in the way we relate to nature and in the generation of energy. In fact, the use of the biotech batteries technology also contributes to water savings of 50%, a heat reduction of up to 4 degrees, and a CO2 absorption of more than 300 g per square meter.

What is the main challenge facing the current biotechnological revolution?

The adoption of this type of solutions by promoters and governments.

It is not being taken into account that these kinds of applications increase the value of a building’s space by up to 20%, and can even improve well-being by 15%, and even the productivity and efficiency of those who work in this type of environment by 20%.

Companies that incorporate this type of solution increase their sales by up to 11%. Economically, applying these solutions makes all the sense in the world; what we need is to make them known on a massive scale.

What benefits would you highlight from biotechnological cities in terms of citizens’ quality of life?

Biotech cities have many benefits. To begin with, they have a positive impact on people’s health, since they reduce stress and chronic diseases. Interaction with plants has been shown to increase well-being in people by more than 15%. Therefore, we calculate that they are capable of increasing life expectancy by 12 years.
Furthermore, as I mentioned previously, the value of the buildings themselves increases, because they invite much more occupancy (23% more) and they are much more attractive to users and tourists.

And, last but not least, because they respond to urgent climate needs. Obviously, they do not pollute, and they take their resources from nature itself, so the benefits in this regard are clear.

What is the most effective way to develop innovation in a company?

From my point of view, the most important thing is that innovation is imposed in all departments, that it does not belong exclusively to the R&D department. Each person, each employee, must have his or her KPIs linked to innovation, also in departments such as Marketing, Human Resources, etc. Otherwise, innovation does not advance and is not incorporated into the company.

What are the main mistakes startups/companies make when innovating?

Above all, selling a product or service before having it, and not estimating the time and costs involved. This leads to savings in things that should not be saved, such as the human team, which is the one that will create the innovation. Many companies focus on reducing time and staff, but what they need to do is precisely to reinforce the human team so that this results in saving time.

What improvements in efficiency and sustainability do you see for the laundry industry in the next 5 years?

Besides Bioo, another biotech project I am involved aim at reducing the impact of plastic in the laundry and avoiding its conversion into microplastics that risk reaching the oceans.

In the next few years we will see many innovations in this industry. I believe that 10 years from now, we will have a totally different industry model.

Well, I’m not really sure. What I do believe, honestly, is that it will not be as we are doing it today, generating a waste that reaches rivers or seas….
There will be other drawbacks, but I think we will have managed to eliminate this particular part.

We would love to know your opinion about it

Don't miss a thing! Be the first to know about our news